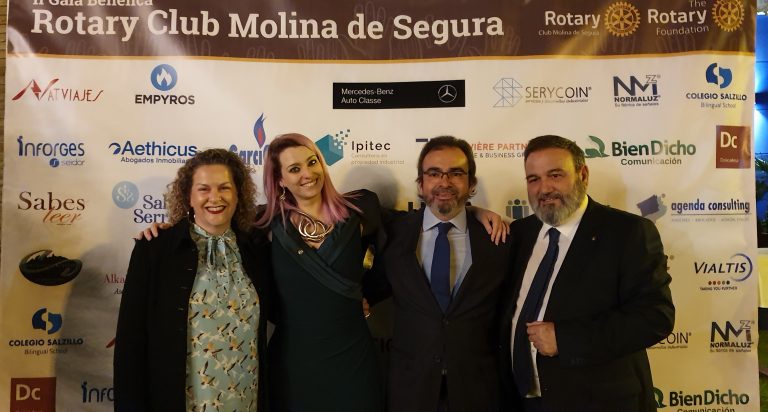 Last Saturday, February 8th, a charity dinner organized by the Rotary Club Molina de Segura was held to raise funds for the benefit of the Phelan-McDermid Syndrome Association.

Aethicus contributed to the objective of the gala by being one of the sponsoring firms of the same, which was attended by more than 400 people and raised over 30,000 euros, exceeding previous expectations.

The Phelan-McDermid syndrome is a genetic disorder that involves a mutation of chromosome 22 due to an alteration of the SHANK3 gene. 80 percent of people with this disease have an autism spectrum disorder.

The funds obtained will be aimed at promoting a line of research at the IMIB (Murcian Institute of Biosanitary Research) with the aim of seeking a therapy that allows people affected with Phelan-McDermid syndrome to develop the SHANK3 protein, which would improve their capacity of learning, their quality of life and that of their families.

In the opinion of Encarna Guillén, head of Medical Genetics at the Virgen de la Arrixaca Hospital in Murcia, and responsible for the future research unit, the results obtained could be encouraging for other diseases beyond the Phelan-McDermid syndrome.

The couple formed by the Murcian comedian Raquel Sastre and the neonatologist José Ramón Fernández, after knowing that their daughter Emma suffers from Phelan-McDermid syndrome, has become an important asset in the visibility of this disease in the Region of Murcia , leading the raising of funds for research.

Aethicus has wanted to contribute to this cause, as research can help improve the lives of the 4,000 people who are estimated to suffer from this syndrome throughout Spain.